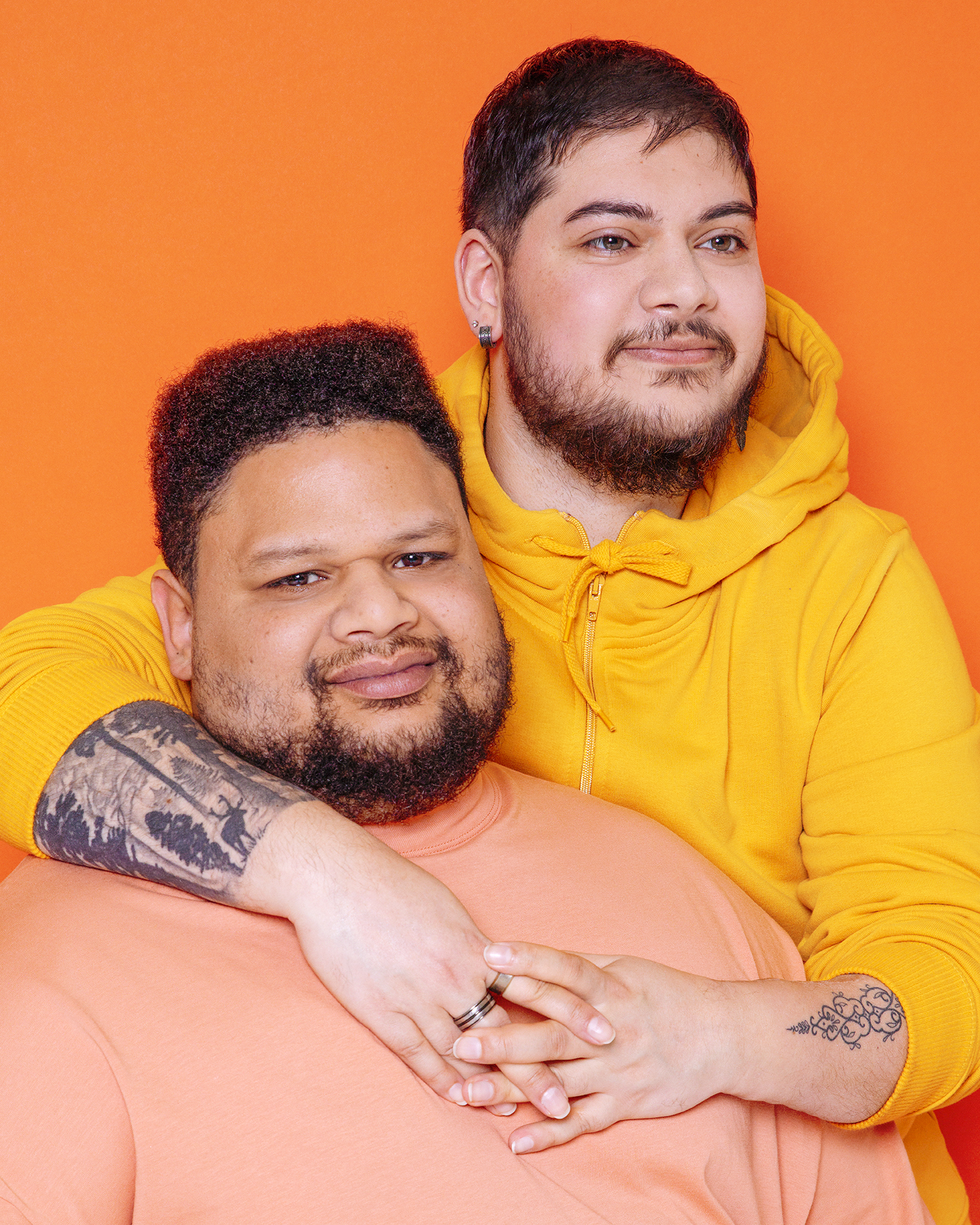 Ryan (29, policy officer at a ministry) and David (31, journalist) got married in September 2020, in between two lockdowns. Ryan is trans non-binary and uses the personal pronouns they and them.

David and Ryan wanted a fairy-tale wedding. And it turned into a fairy-tale wedding where many worlds collided. Ryan’s strict evangelical parents, David’s free-spirited, sociable family from Brabant (a region in the South of the Netherlands). Ryan’s queer friends, David’s straight friends and the artists from his student lodgings.

Ryan: ‘It was very special that my parents were there. They wouldn’t come at first. Then they agreed to come for half a day. But in the end, they were there all day.’

David: ‘The ceremony took place in the village where I grew up. The theme was rainbow. Everyone was dressed up colourfully. My witness was dressed in bright purple. I was dressed in a sharp suit, Ryan in a non-binary version of traditional Hindu attire. Everyone waved rainbow flags. There were many bystanders who saw us walking into the town hall with all our colours. This felt like a statement.’

When David and Ryan started dating after meeting on Tinder, Ryan’s desire to have children came up fairly quickly. And also that Ryan wanted to carry and give birth to the baby – that is possible because Ryan still has a womb. Ryan also indicated that they wanted to get married. Ryan: ‘I grew up in the tradition that marriage is a milestone in your life. I’m not allowed to get married in church, but I think it’s really cool that I can design the tradition in my own way.’

David mainly wanted to get married because of future anniversaries. ‘Just like with my parents, uncles and aunts. Very regularly there is a party going on, with a large tent in the garden, songs, food and drinks. It’s so nice to continue to celebrate love your entire life.’

Ryan grew up as a daughter in a Christian bubble. When they noticed that they were different than what was expected, they felt that this was not allowed by God. ‘It really stressed me that I would lose everything if I came out. That also happened: I was no longer allowed to enter my church and lost my circle of friends.’ Ryan’s parents heard in one fell swoop that Ryan wanted a transition and a new name. ‘I didn’t understand their disbelief at all. I was a tough kid at a very young age. So why had they missed this? I now realise that I was ten steps ahead of my parents. I had already watched endless videos on transitions on YouTube and I followed Ellen DeGeneres. While my parents had never even heard of trans non-binary. I now understand their response much better.’

Ryan presents as a trans non-binary person to the outside world as often as possible. ‘I want to show that it exists. My process would have been much easier if I had known that as a child. I only heard about it when I went to college, during a lecture on gender.’

David doesn’t have the urge to profile himself like that. ‘Maybe that’s because I’ve had to fight a lot less. In my family everything was embraced. When I introduced you, they said: Oh? Oh! They had to get used to it, but soon they got back to business as usual.’ <