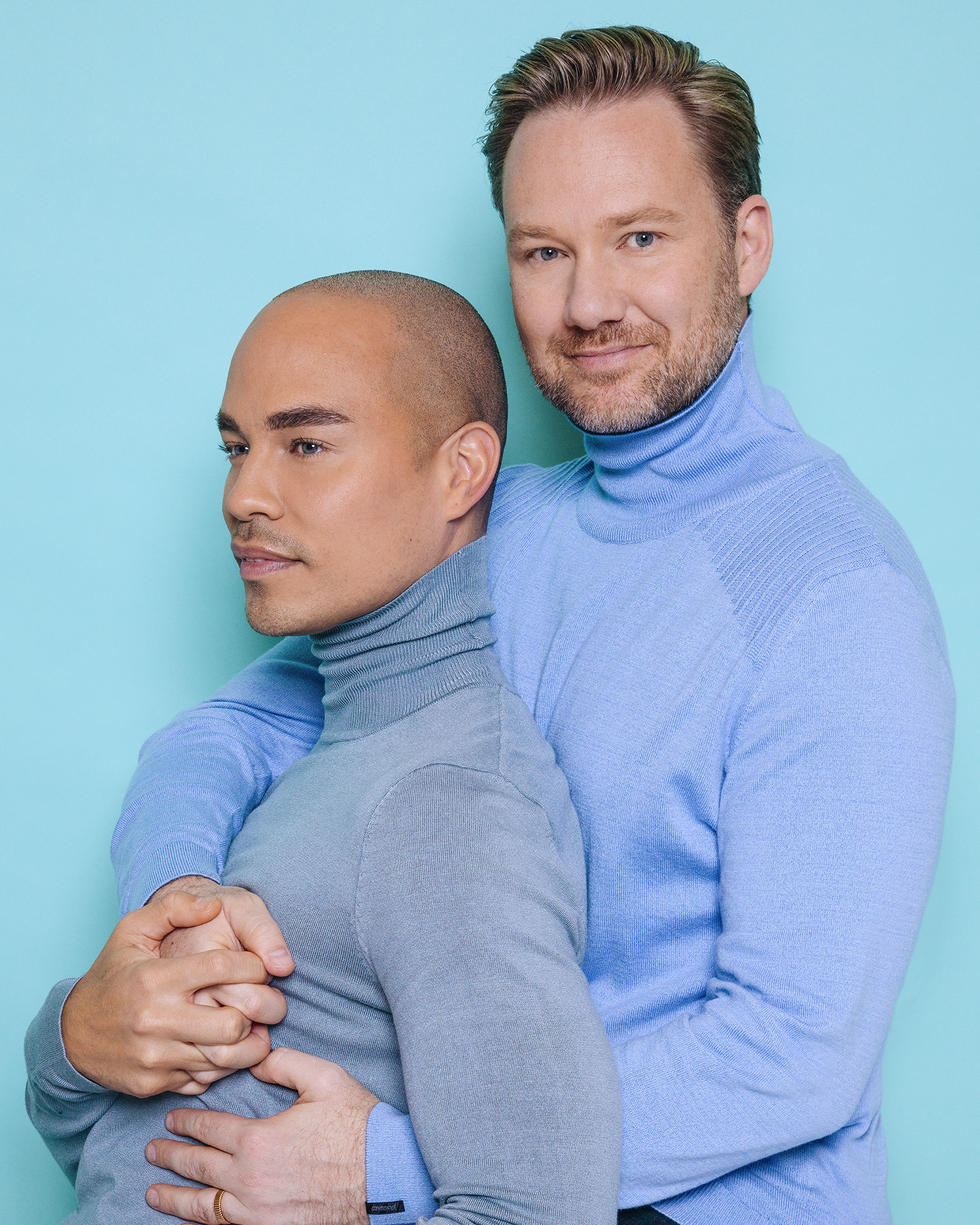 If you propose, I don’t want to be on top of a mountain. I don’t want to sweat! Make sure our families and friends are present. And enough cameras! Rick: ‘I had been getting hints from Roger for years about how to propose to him.’ In order to meet all his wishes, Rick organised a photo shoot at the Conservatorium Hotel where Roger would be portrayed as an Amsterdam entrepre-neur for a magazine. Roger: ‘The photo shoot was so over the top. What do you mean, backstage image? I’m not a celebrity, am I?’ While Roger was posing, Rick showed up with the ring. Roger had barely recovered from the shock when it turned out that both families – flown in from all over the world – were hiding in the bar. Roger: ‘I felt so loved. That someone would go this far for me, it left me speechless.’

And then the wedding took place.

Roger: ‘We met in Amsterdam’s nightlife. I was 23 and busy experimenting. As a child and teen-ager, I got bullied a lot because of my feminine side, but now I was fully accepted by my new chosen family. And then I ran into Rick. I intuitively recognised my life partner.’

Rick grew up in a white, conservative, Christian community in South Africa. He came to the Neth-erlands to study. ‘I liked it here. At home, I was the golden boy with my high grades and leader-ship roles. But in the Netherlands, nobody cared what I had achieved. They wanted to know who I was. As a result, I started to discover myself and my feelings for men.’

Roger’s mom was okay when he came out – his dad died when he was three. The acceptance process took longer for Rick’s parents. Rick: ‘Where I grew up, homosexuality is a mortal sin sub-ject to devil exorcisms.’ His parents were expelled from the church and the community. They lost friends, family and business contacts. Rick: ‘My parents suffered much more than I did. But they have always made an effort to understand me. When they asked questions, I answered. I heard from friends that I had to be patient. And in the end, the love for their child turned out to be stronger than their prejudices.’

Eleven years later, Rick’s father has turned into an advocate for gay rights. Rick: ‘When I was little my father said to me: be yourself, because that is how you will meet like-minded people. The same happened with my parents. They met people who are also open-minded.’ Roger: ‘Now we are one big happy family. His mother is crazy about me. She doesn’t view me any different from her other son’s partner.’

The fairy-tale wedding at the Molenvliet estate in South Africa finally took place on February 29, 2020. Think: the marriage proposal multiplied by a factor 1468. Roger: ‘This is the advantage of a slow acceptance. When everyone was finally ready, we had the resources to do what we wanted.’

At the wedding, Rick’s father gave a speech in which he said sorry to his son. And he thanked him for opening his eyes. He said, ‘No one chooses to be disowned, to hurt his family. God made you the way you are. Who are we to condemn that?’ <

• The anniversary celebration of the opening up of civil marriage to people of the same sex.
• Sharing the marriage experiences of a diverse group of portrayed married LGBTQIA + persons with a large and broad target group.
• Looking back on the past 20 years with an eye on the future.
• Putting current problems that arise around the acceptance of LGBTQIA+ people on the agenda.
• Driving the conversation about the current state of affairs regarding acceptance and inclusion.
• Promoting social acceptance and equal rights of LGBTQIA + people.