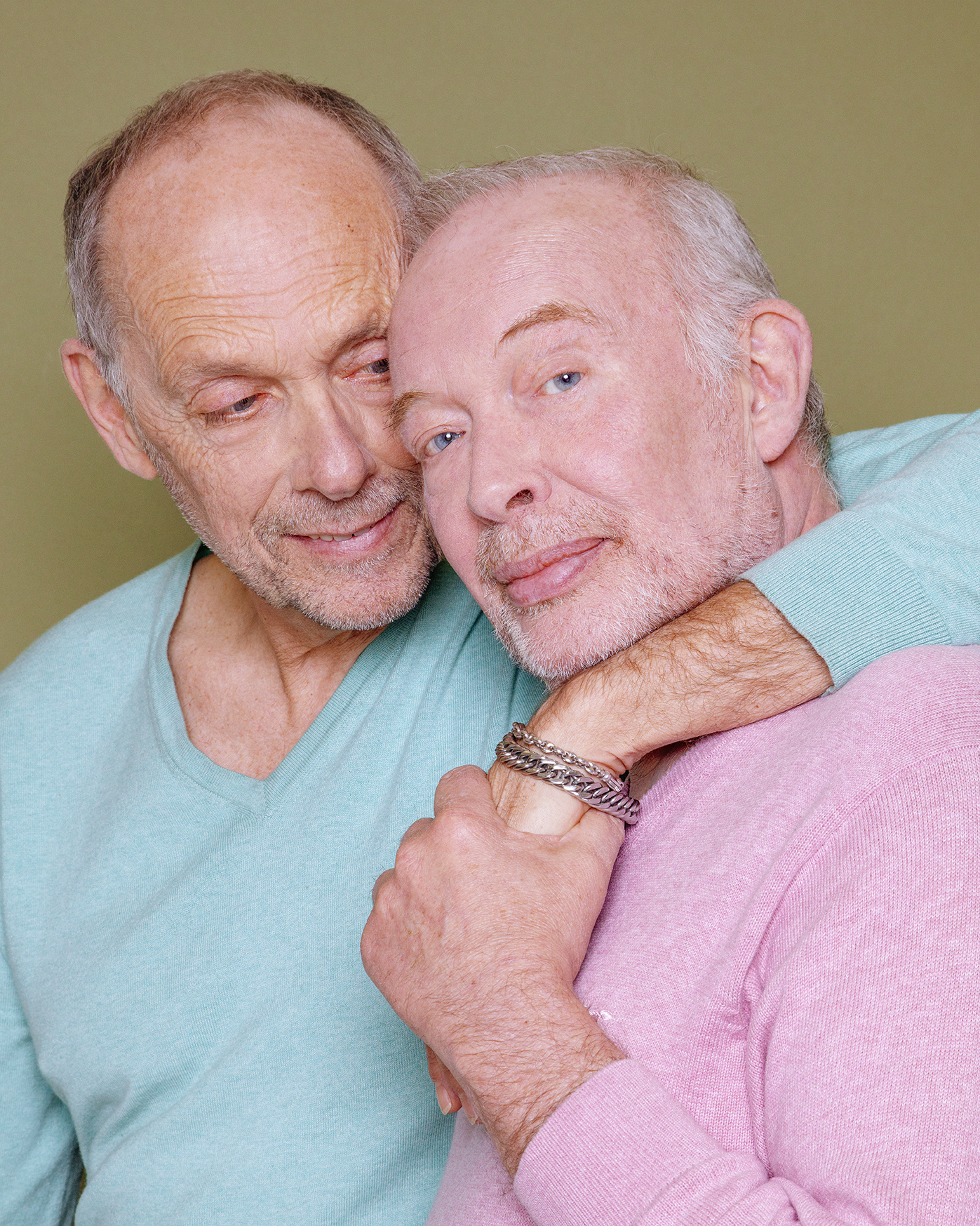 The eyes of Frans (68, theatre producer) and Maarten (68, retired flight attendant) met for the first time in Hotel Americain in Amsterdam. Frans walked around there in a filthy Waterlooplein fur coat while Maarten was sitting at a table with his mother. Shortly afterwards, Frans had a dream. He walked into a house after a man. The man walked up the stairs, only his legs were visible. He turned around at the top of the stairs. It was Maarten.

French: ‘I knew this is ‘him’. So when I bumped into Maarten while I was going out weeks later, I made sure he was talking and laughing with me all night long. In the end he came home with me.’

Twenty years later, Maarten and Frans sat on the terrace together and they said to each other: it seems like we just ran into each other yesterday. After thirty years they attracted comments: thirty years together? I wasn’t even born then! Maarten: ‘Then you realise that it is indeed very special. Now we’ve been together for 43 years and looking back you think: being together is who you are. It has been our life.’

When they met in the early 1970s, the atmosphere in their artistic circle of friends was very progressive. Frans: ‘I had heard my father say that if his son was gay, he would break all his bones. But when I told him about my sexuality when I was about seventeen, he was very sweet. You remain my son, he said. At the time, I walked down the street holding hands with a boyfriend. Nowadays there is again a fuss about that.’

Maarten remembers that for a long time he did not know what to do with his feelings for men. ‘I grew up in the South of Amsterdam in an open atmosphere. Still, I was afraid to talk about it. And when my only sister turned out to be a lesbian, I felt guilt towards my parents. Late in puberty I had some sexual experiences, and it all became a bit easier.’

Both Frans and Maarten find that coming out nowadays has become too much hassle. Frans: ‘It’s just a sexual preference, get a life! And all those letters! A letter is constantly added. They are being way too difficult! These variations are as old as humanity. I don’t understand it, you can feel what you like, right? Just make a choice!’

Maarten also feels suffocated by all these new boxes. ‘I think it’s more like a new prison rather than a new freedom. You have to live up to so many aspects. Everyone should do what they want, but I don’t understand it.’

Maarten and Frans considered – and still consider – wedlock bourgeois. French: ‘Gays imitate what their parents did. Especially if they also adopt a child.’ Yet they got married, on the advice of a lawyer. It was the cheapest option to ensure their things would be properly organised. Maarten: ‘If one of us dies, the money doesn’t go to family.’

Frans: ‘We got married on a Monday morning – for free – in the Wim T. Schipperzaal in the Stopera, the town hall of Amsterdam. I became emotional the moment I said yes, in front of an institution, the government. I think this was because of the official recognition of being gay, this is something that a lot of people from the gay movement have struggled for for a long time.’<